This project was initially developed as part of a 2-days hackathon at Yara Brazil in 2020, where I worked as a Product Designer. Teams had two days to develop a solution for a given problem, and the best one was awarded a special budget so it could be implemented. Our project was the winning one, and then we had the opportunity to work on it for three months.

The team was made of 6 people.


Several departments were presented at the hackathon and then were randomly distributed to equally randomly assembled teams. Teams had to identify problems within those specific departments and deliver an MVP for the solution after 2 days.

The solution showcased here is the MVP we delivered for a simple and intuitive app, which allows Yara's employees to easily book a workstation in one of the offices from Brazil. We identified that the process of booking workstations over email was consuming time and money from the department we worked with, so we came up with a solution to streamline that process.

Getting to know the department

The team we worked with was called Facilities, and they were responsible for keeping Yara's offices in Brazil up and running. Their job was mainly to keep offices organized, filled with everything that employees needed, and provide a safe and nice space for everyone.


Our first step was to get to know them better. To achieve that, we had the chance to talk to 6 people from the 2 offices. We ran semi-structured interviews. They would start with the same structure, but then once we identified a potential issue in their workflow, we had the freedom to explore that. Because we were 6 people, we split into pairs, so one person was responsible for the interview and the other was the note taker. That way, the whole team was involved in the process and we could also move faster. 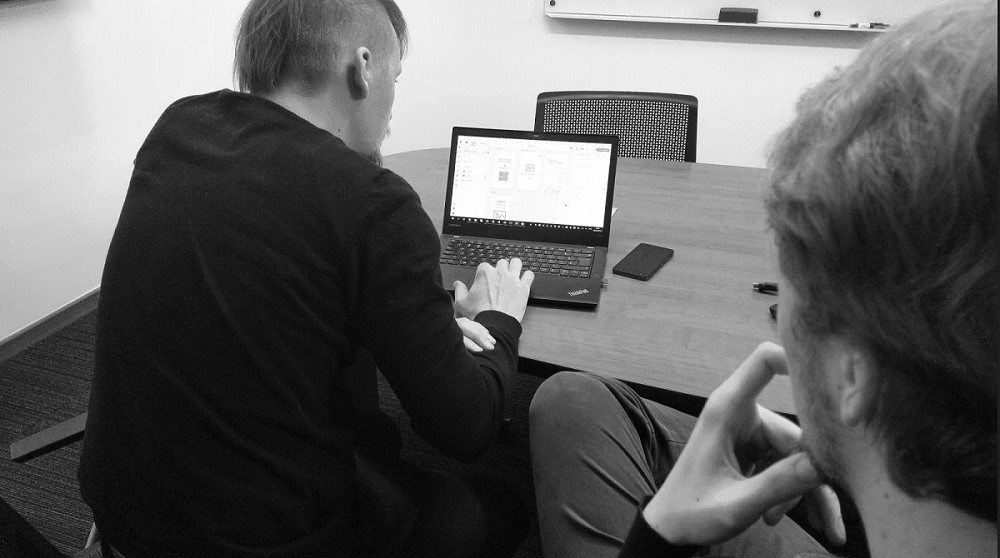 After the research was done, it was time to analyze all the data from it. We wrote all the relevant information from the notes and recordings in post-its and created affinity groups. 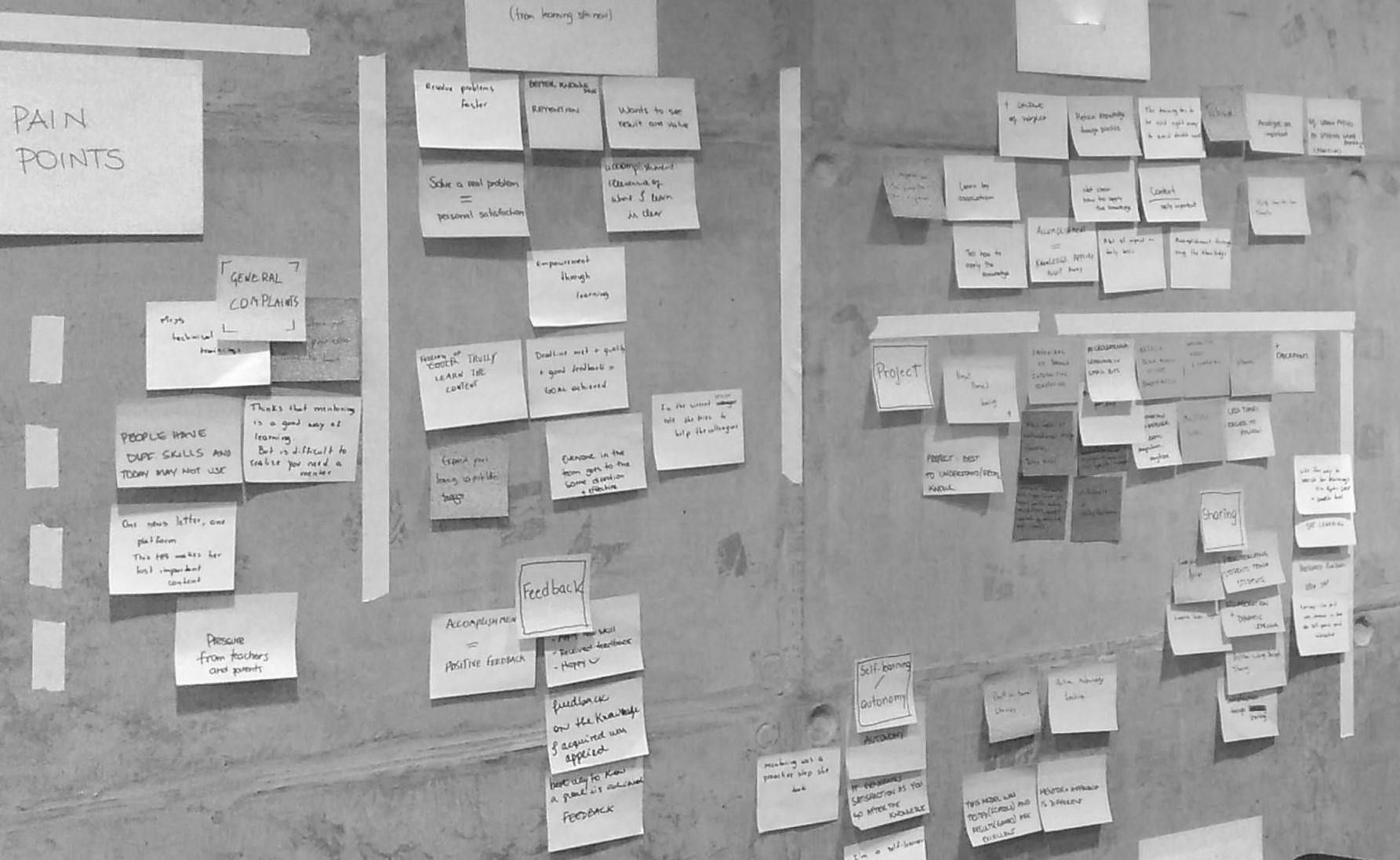 Our main findings were around the same subject - the workstations booking.

Workstations had never been a problem. Both offices in Brazil had plenty of them. But the beginning of the pandemic changed everything. Employees had to go to the offices, but they also had to be safe. So with the needed social distance, the capacity of the offices was cut in half, and suddenly the Facilities team was faced with a new problem - how to fit everyone safely in the offices.

By the time the hackathon happened, the process was being done manually. Whenever an employee had to go to the office, they had to send an email to the Facilities team, telling them the day and period they needed a desk, wait up to 72 hours for their reply, and then have their clearance to go to the office. It seems like a rather simple process - except for the fact that they had been getting around 30 requests a day, and all the work was being manually handled in a spreadsheet.

The cancellation of the bookings was another huge issue. The demand was big, and every week people would give up on their bookings but wouldn't let the Facilities team know it. So they ended up with empty desks that couldn't be used due to short notice when a simple email with a cancellation note would have been enough. They were even considering allocating someone to deal exclusively with that.

So we had our problem, and then we framed it in the HMW statement.


How might we streamline the process of booking workstations for Yara's employees and ease the daily work of the Facilities team?

From the research, we then created our proto personas. 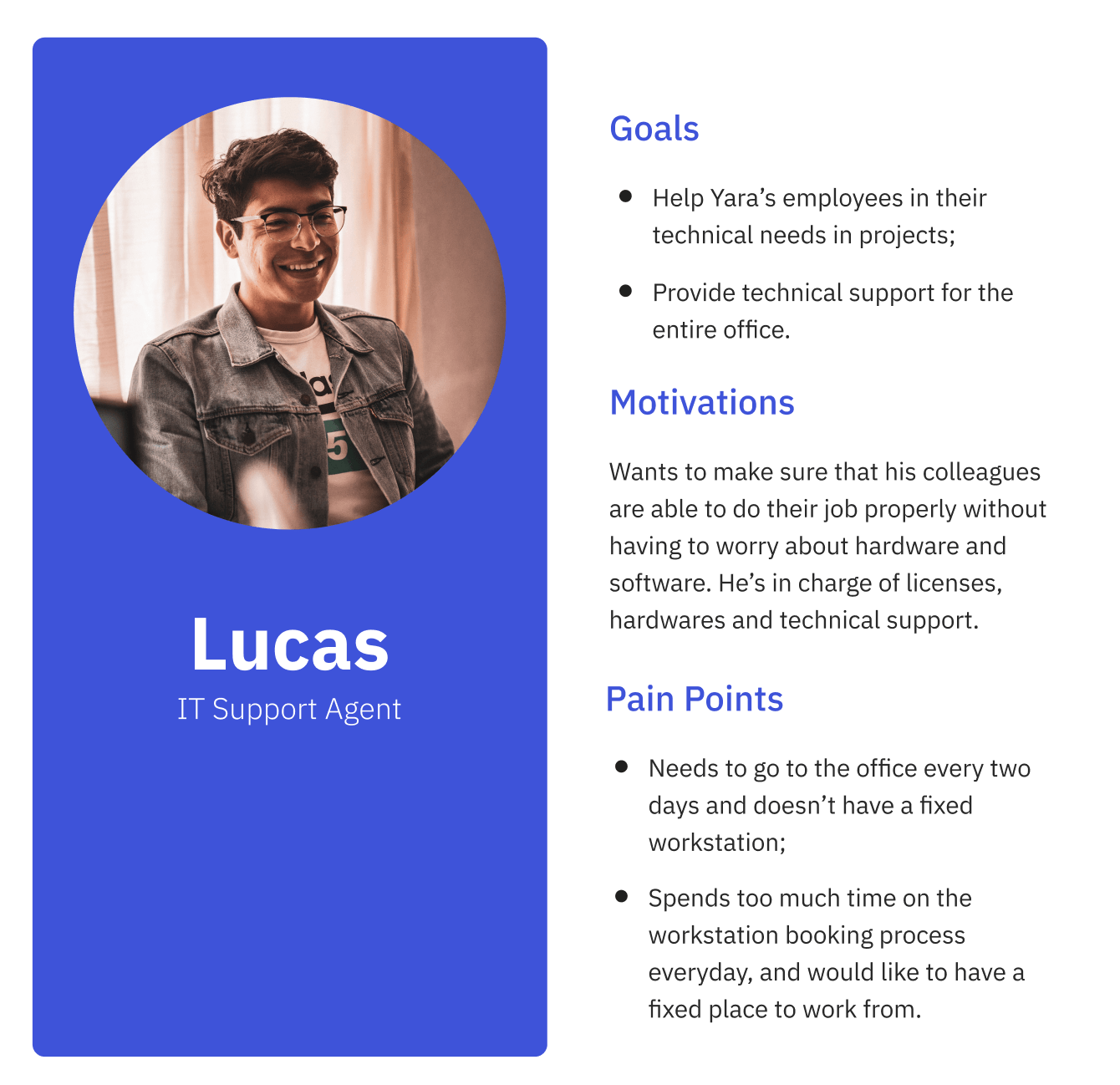 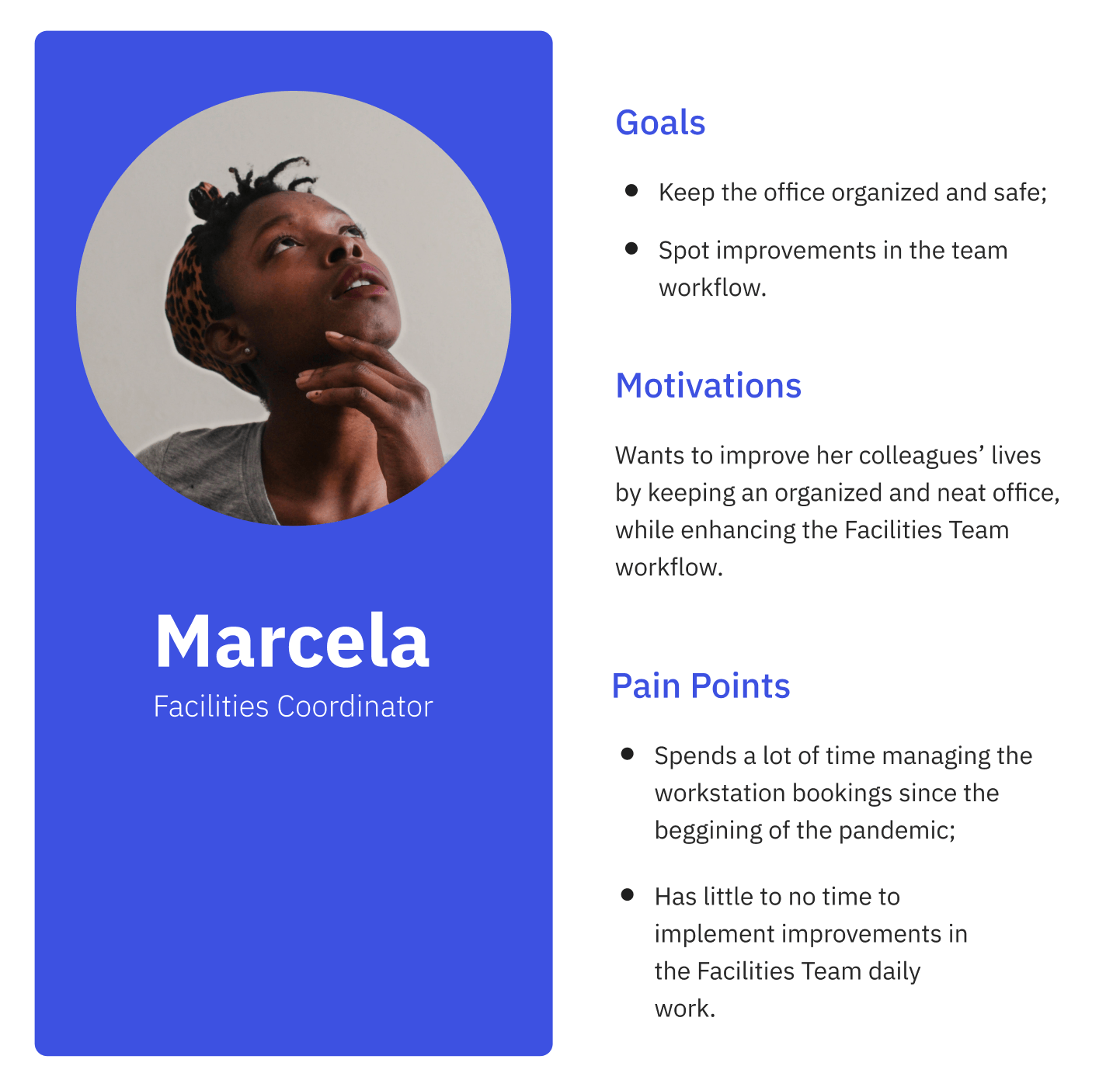 We had our problem, and the idea was soon conceived - a mobile app that would allow employees to easily book a workstation and make the Facilities team life's easier and focus on what they did best - providing an amazing workspace for everyone.

Because all of us were part of the entire process, I organized a Crazy 8 session with my teammates. We generated many valuable ideas and it helped me to concisely create the first sketches for our solution. 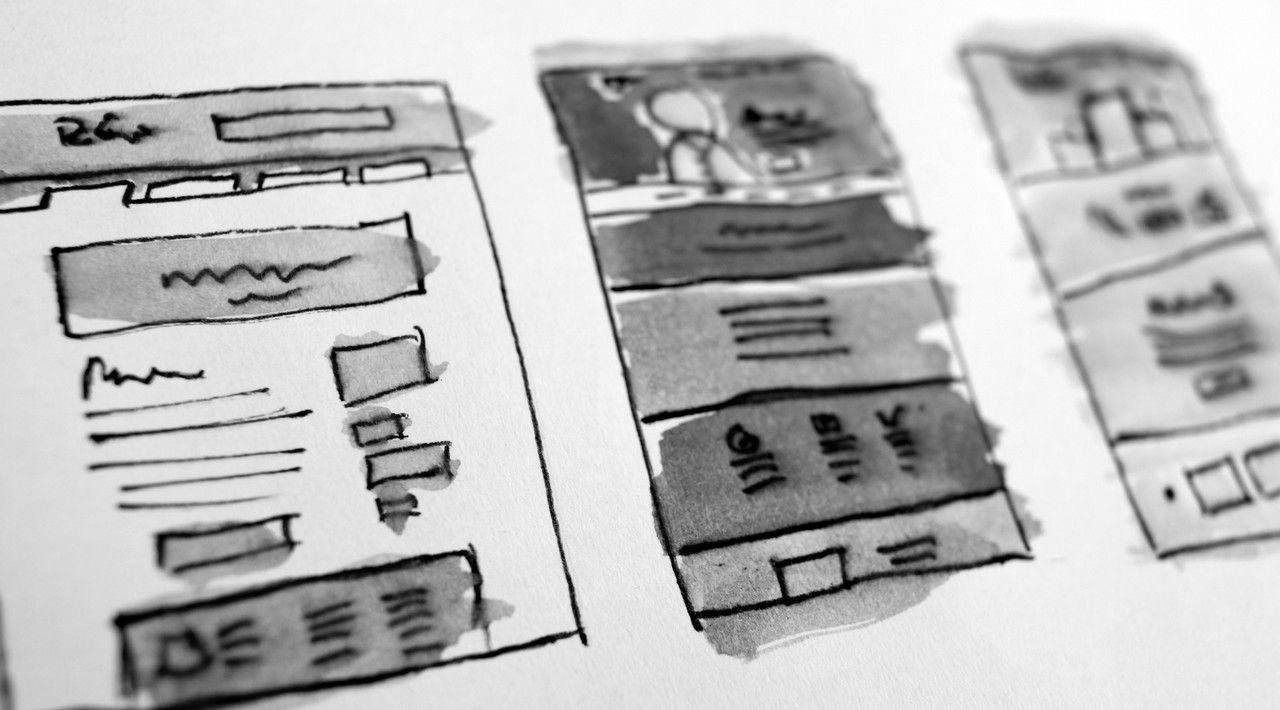 After we structured our solution, we put together a Proof of Concept on Power Apps, so we could test our solution within the 2 days. We got to test it, and after we were sure that it worked, I worked in the high-fidelity prototype while the developers delivered an Architecture proposal and the Business Analyst delivered a roadmap and a story mapping.

These were the final designs I proposed, and which were included in our implementation plan. 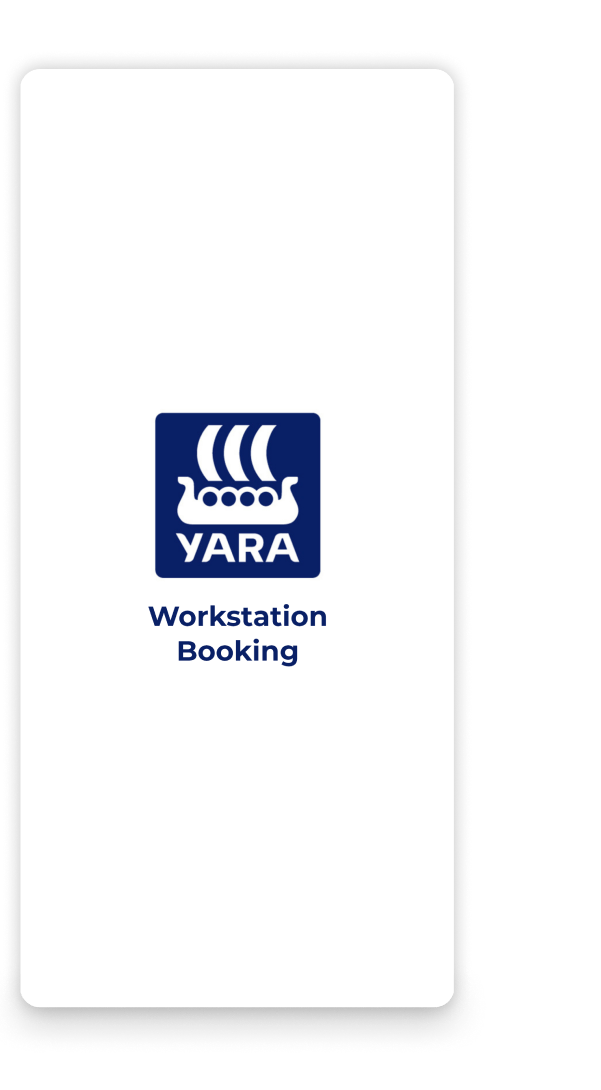 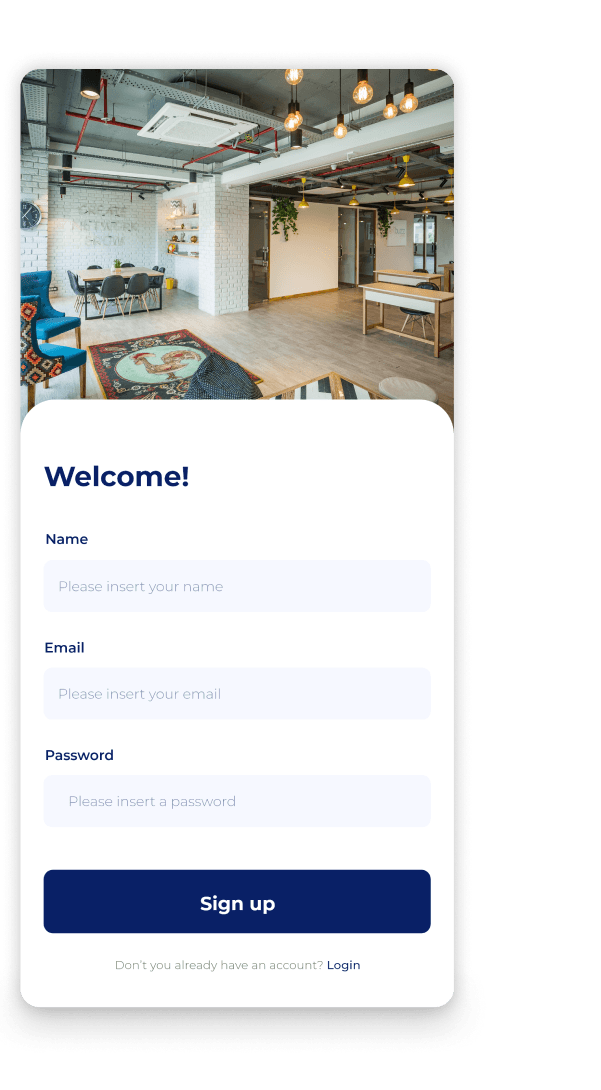 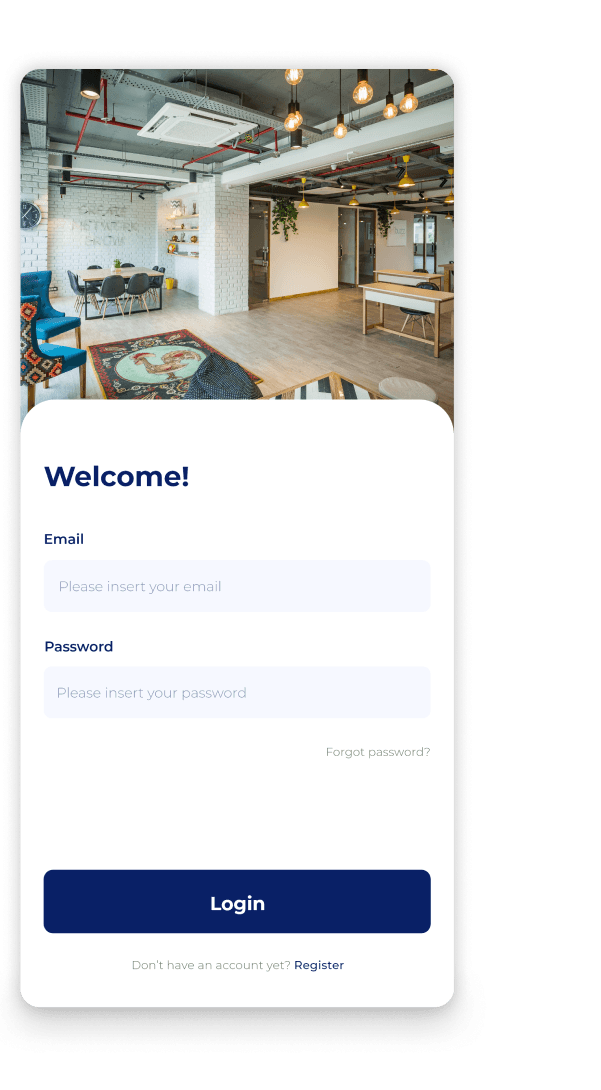 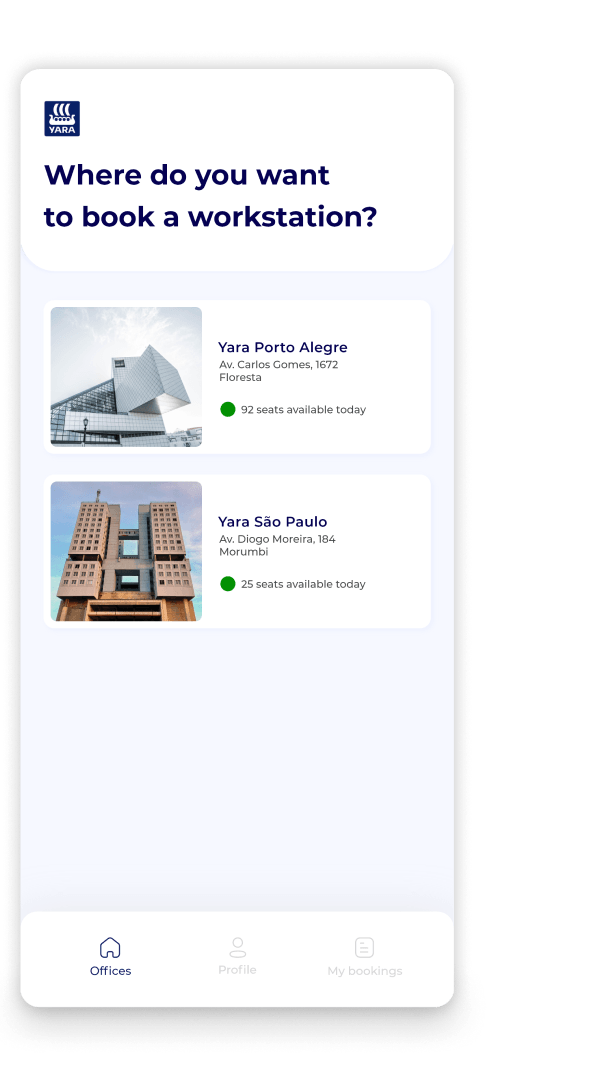 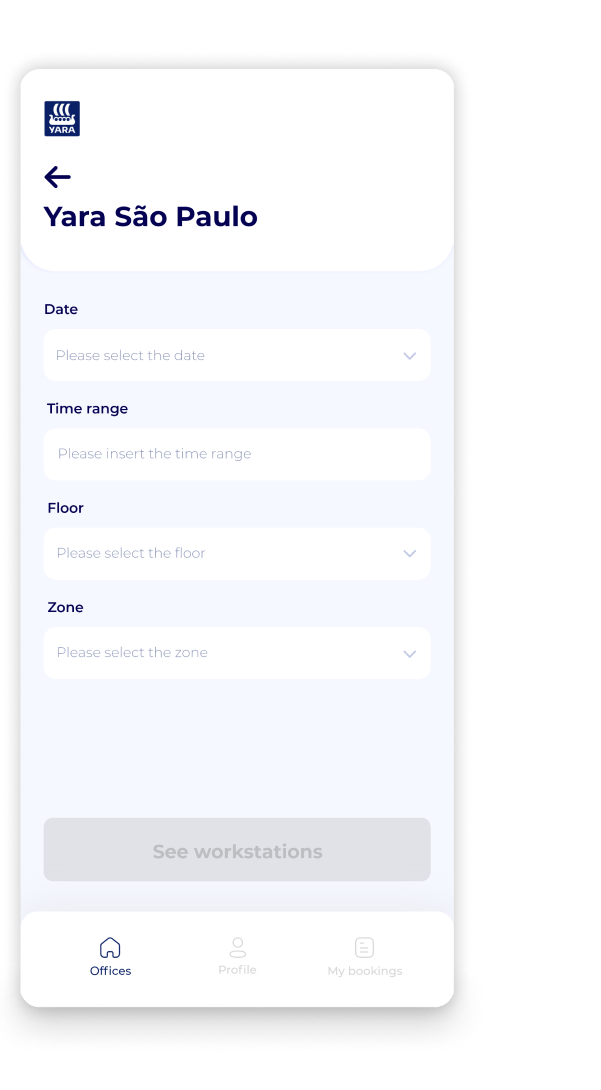 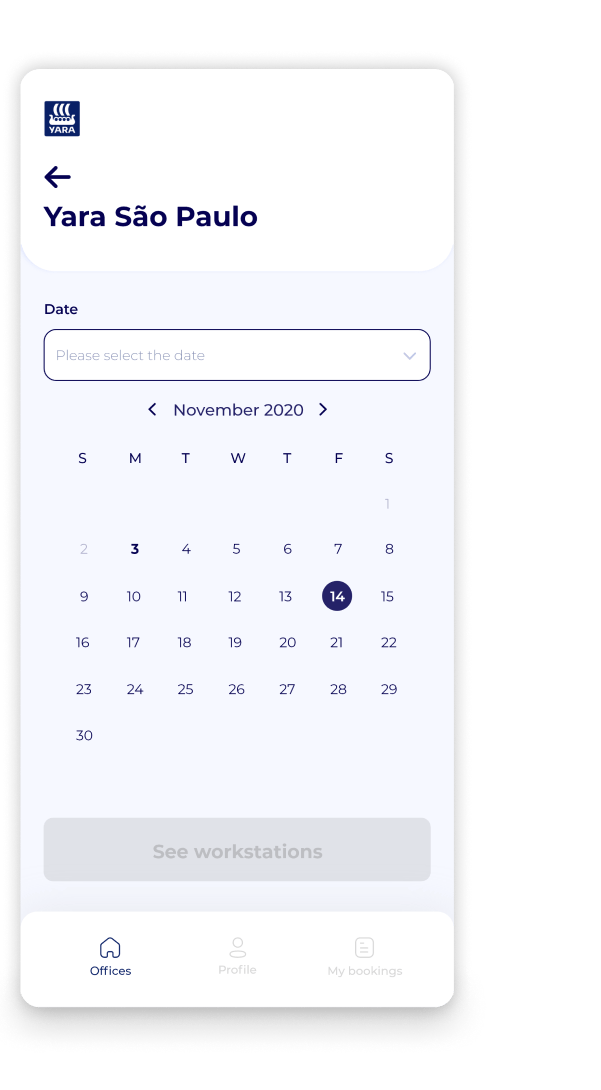 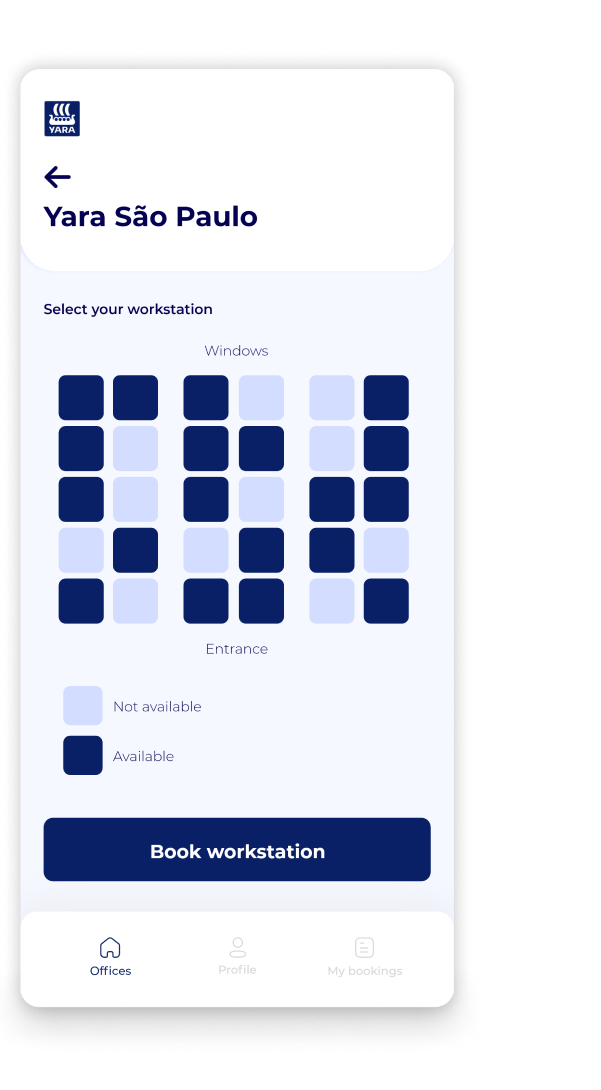 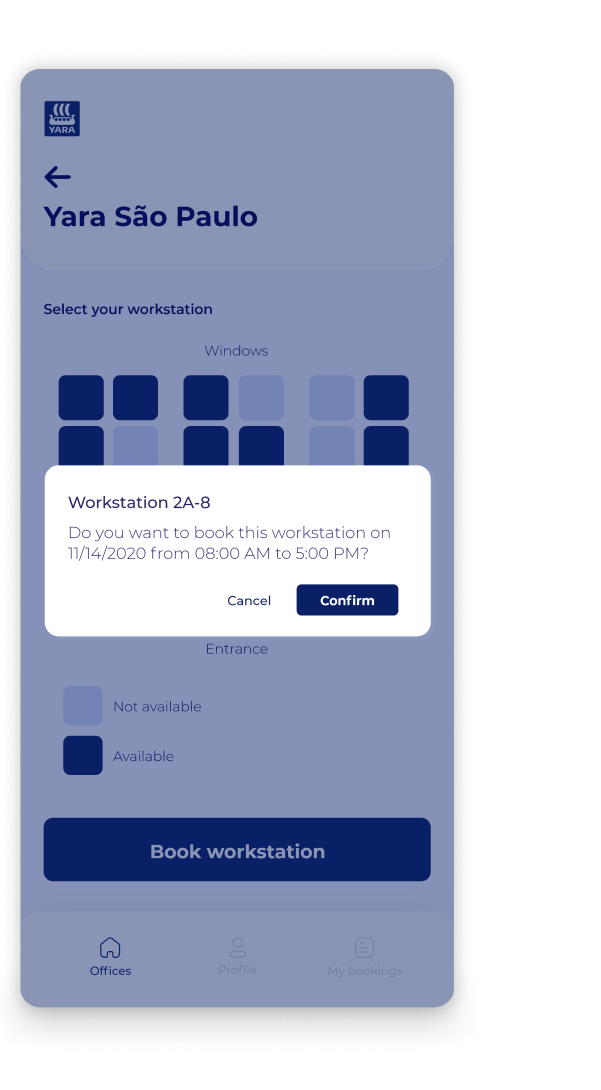 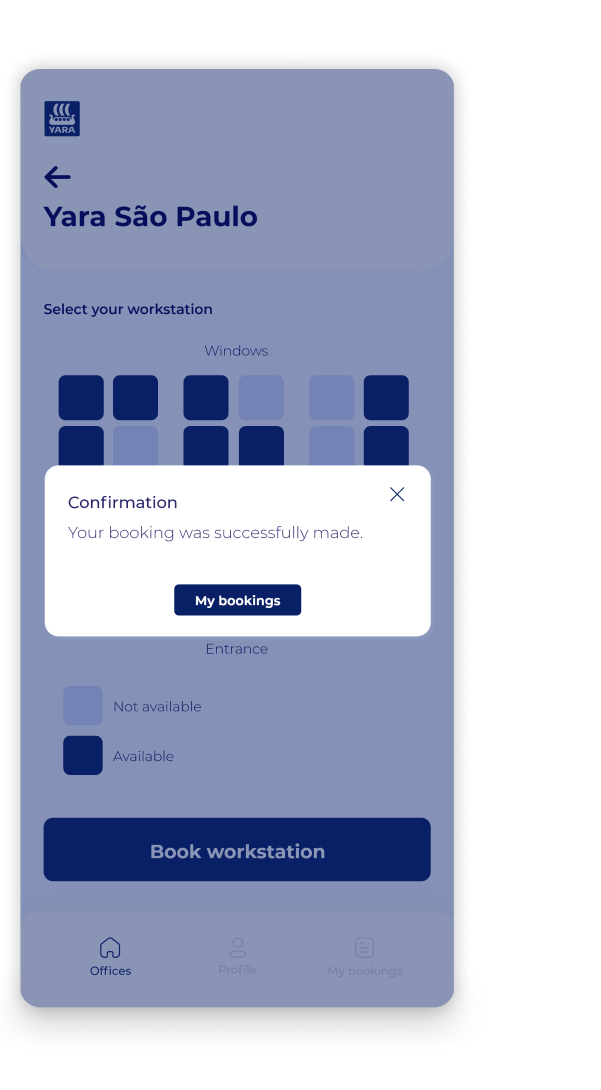 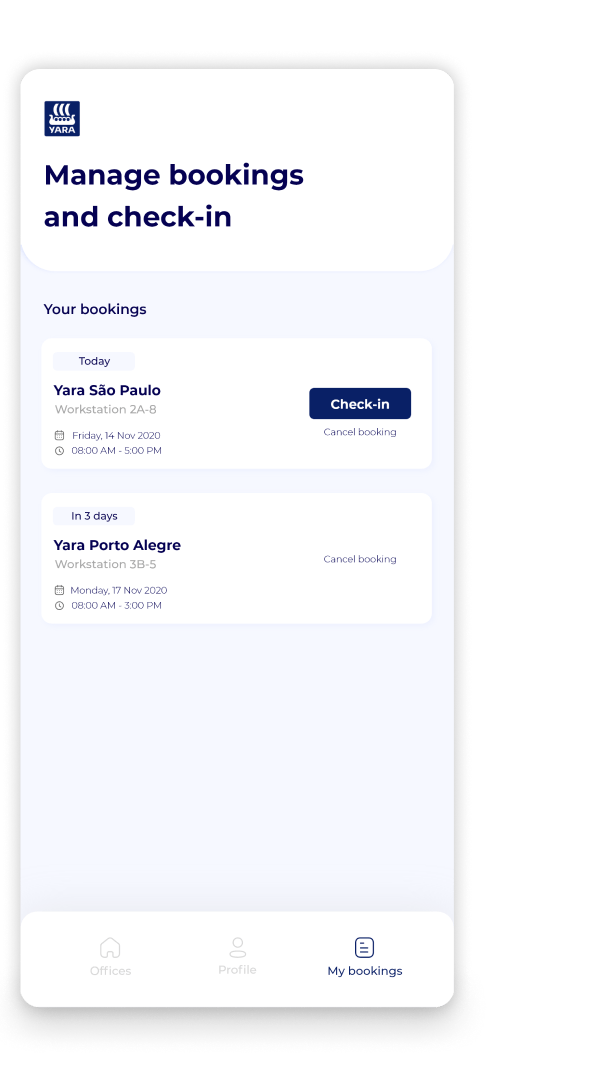 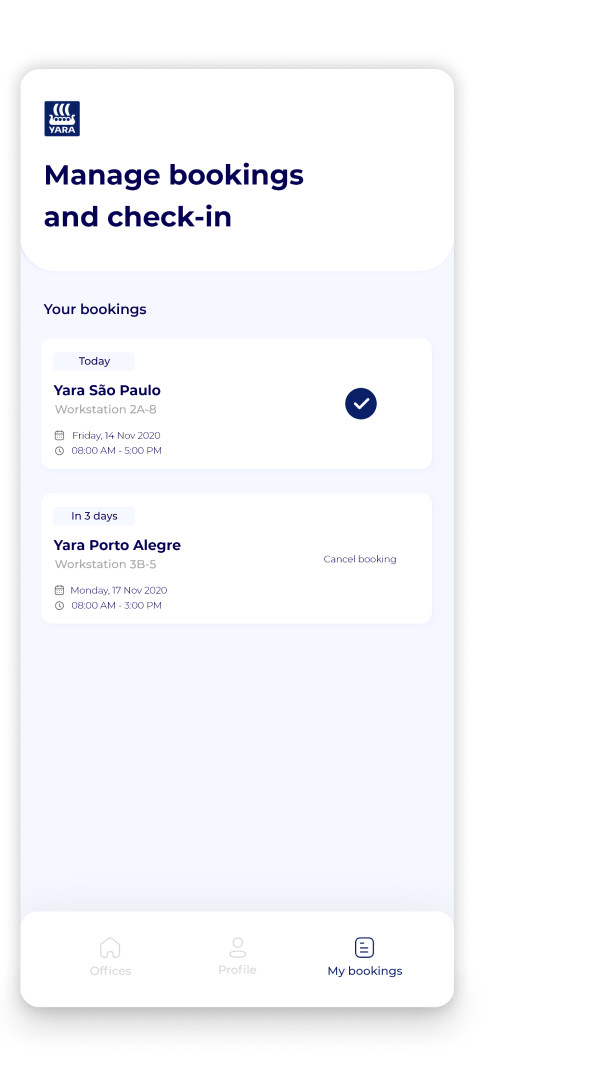 We ended up being the winning team, and then had the following three months to work on our solution. By the time I left the company, the MVP was already being used, and the results were already seen.

With our solution, we got to:

• reduce the response time for employees to book a workstation, from 72 hours to nothing, since everything was solved immediately in the app;

• ease the daily work of the Facilities Team, since they don't have to deal with the 30 emails a day every day;

• we saved the company all hiring and equipment costs for a new employee since they were going to hire an intern to be in charge of the bookings and our app eliminated that need.

It was an intense and enriching project, and the feeling of solving a problem through my and other's skills is something that I deeply appreciate in my work as a designer.

❮❮ back to portfolio
next project ❯❯